Grand Port Maritime de Guyane improved an existing quay in the port of Dégrad des Cannes / Cayenne and extended it by 80 metres to allow vessels with increasingly deeper draughts access to the quay as well. During construction of the quay extension, however, they came across bedrock with a length of approx. 200 metres above the desired depth level of -4.20 CM.. These rocks impeded the passage of larger vessels to the quay extension and as a consequence only limited use could be made of the new quay. There was a risk of wave action and swell causing the ships to hit the rocks. Because the bedrock consisted of granite (diorite), there was only one solution: they had to use explosives!
Grand Port Martime de Guyane therefore invited tenders for blowing up the rocks and removing the debris.

Baggerbedrijf De Boer has been carrying out maintenance dredging on the Mahury river and in the harbour since 2008. Because of this, they know the area very well. This contract involved more than dredging, a partner with expertise in the field of explosives had to be sought.

Baggerbedrijf De Boer contacted Nitrex srl® for blowing up the bedrock. This Italian-based company specialises in civil engineering projects involving the use of explosives. Baggerbedrijf De Boer’s water and air injection dredger “Delta Queen” was converted to suit the purposes of this operation. As the vessel’s spud poles were too short for the job, they had to be extended by 3 metres. A water pump on board was removed to permit installation of Nitrex srl®’s drilling machinery.
In order to chart the exact shape of the bedrock, a survey was made after this layer had been removed. This was done with the aid of the RTK positioning system. Based on this survey a drilling pattern and a blast pattern were made.

Watch the video of this project

To protect river fauna, the organisation “UMR Borea” was engaged for the implementation of a protocol for monitoring the sea mammals and turtles during the blasting and dredging operations. Wildlife observers closely monitored the animals with a view to accurately assessing their locations and movements, near the blasting zone or at a safe distance from it? A bubble curtain was installed around the blasting zone: This was done with the aim to suppress the pressure waves caused by the blasts and to keep wildlife at a safe distance.

When all safety precautions had been taken, a start was made on blowing up the bedrock. After the first blasts it became clear that the granite was so hard that additional boreholes had to be made and more explosives had to be applied with the aim to breaking the bedrock down to smaller pieces of rock that could be removed more easily.

In order to clear the broken rocks and rubble from the bottom, a crane was mounted onto a pontoon and with the aid of RTK-GPS the rocks broken by the blasts were localised and removed. This way a total of approx. 600 cu.m. of rocks was lifted. The large pieces of rock were reused for shore protection. 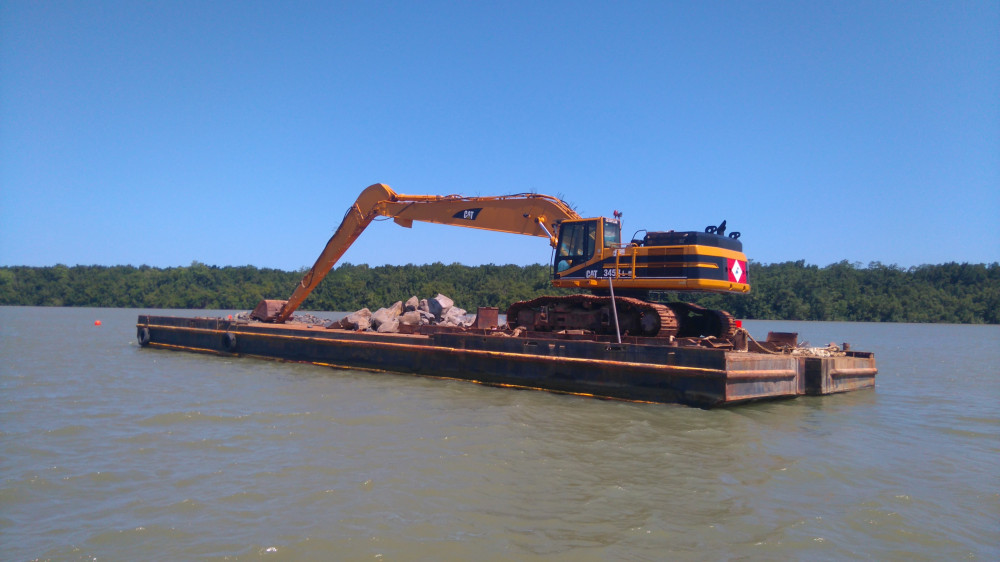 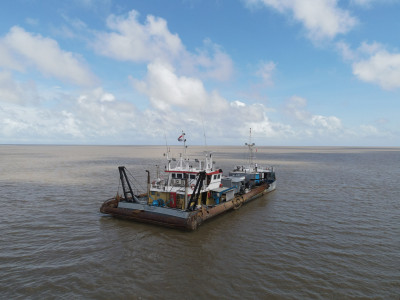 Delta Queen I
Back to projects
Share Mail LinkedIn WhatsApp

Maintenance dredging and towage services at Cayenne and Kourou